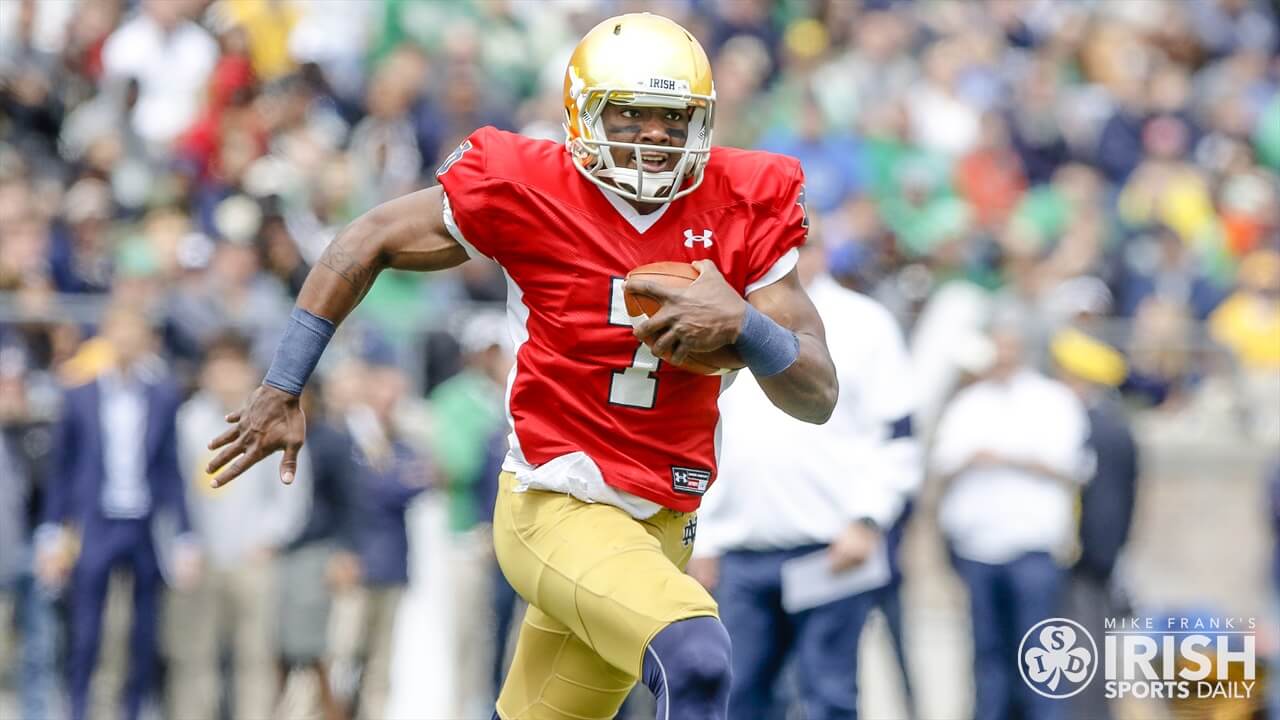 Solon Stephanou breaks down the Notre Dame offense in part 1 of his series on the takeaways from the 2017 Spring Game.

This offense looks a lot different from the one run by the 3-headed monster of Kelly, Denbrock, and Sanford last year. The offensive brain trust last year proved that there were too many cooks in the kitchen as there was a lack of cohesion among the different styles of offensive schemes that they attempted to implement together. With Kelly, Denbrock, and Sanford each trying to add a different element to the offense, there was often times a lot of confusion at the line of scrimmage with the quarterback having to make a lot of checks and adjustments instead of simply making a play. With the offense much simpler and more streamlined, things moved much faster and with much more tempo. Chip Long is already making things interesting on the offensive side of the ball.

The offense doesn’t only look different in the way it functions, but also in the way it lines up. I really like all the different looks that Chip Long showed us. We often saw the slot receivers line up out wide while the tight ends and larger receivers like Chase Claypool, Equanimeous St. Brown, and Alize Mack (formerly Jones) lined up in the slot. This will likely create a lot more confusion for defenses as it becomes tougher to anticipate and predict what types of routes will be run by each position as they are all versatile. The receivers kept changing the routes they were running, which is great as it will make it difficult for defenses to keep up. The offense also looked dangerous in its two tight end sets as Durham Smythe and Alize Mack both looked like formidable blocker and receivers. This will allow the offense to be very dangerous in the pass, run, and play-action game.

Considering that it is only the spring game and these guys haven’t had a full fall camp of reps yet, not to mention that with their red non-contact jerseys on, they were not able to execute the runs in the run-pass option, the quarterbacks looked pretty good. Wimbush looked like the sharp, gifted passer of the ball that he is as well as showing off his fleet of foot athleticism. If some of those plays were not whistled dead and some of those “sacks” not granted, we could have easily seen Wimbush create a big play from nothing. He did throw a pair of interceptions, one of which came from miscommunication with his receiver, but those should be limited as he gets more reps in the summer and fall. Ian Book also looked very good and probably significantly better than most people’s expectations. Book looked very sharp on the short and intermediate throws, made the reads quick and got the ball out with a quick release. Book did show a glaring weakness in the deep game as he was not able to get enough velocity on the ball and threw a few floaters which allowed the defensive backs to get underneath it and make a play. If called upon, Book showed that he can run the offense, albeit at a more limited capacity.

Image used with permission from IrishSportsDaily.com.