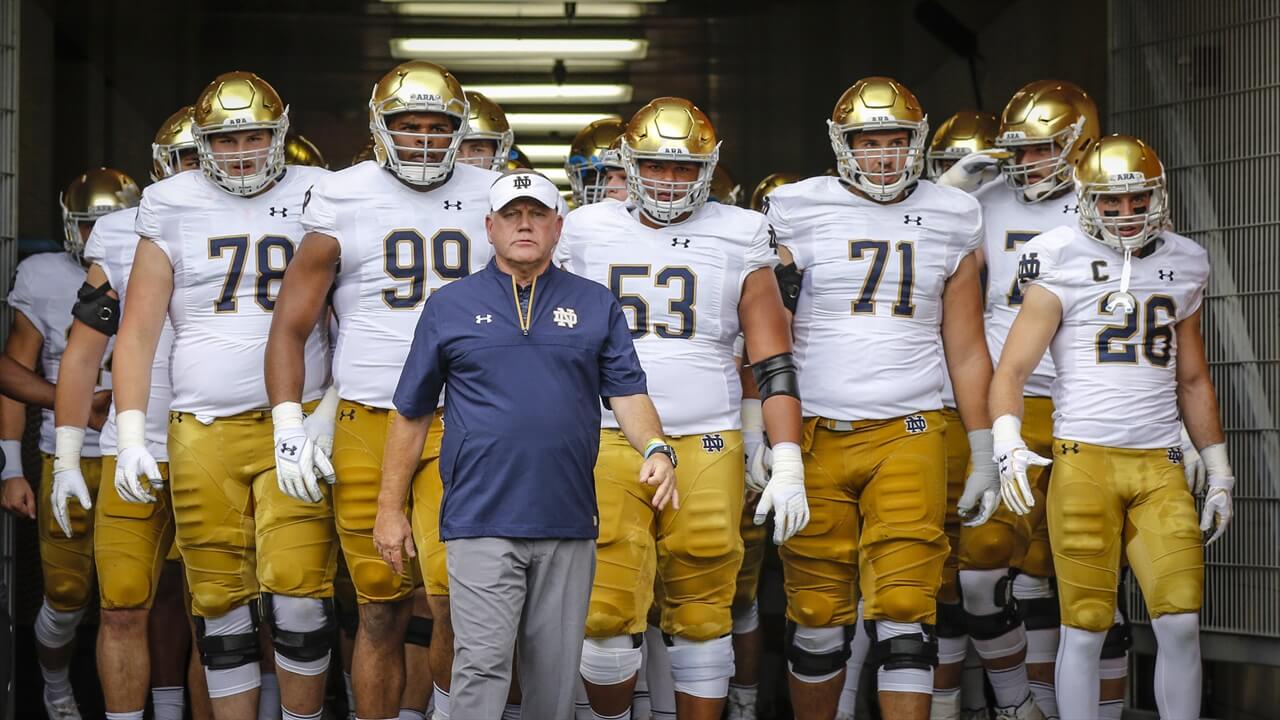 Saturday night’s loss to #7 Miami on the road was a shock to the system. It looked as though this Irish team didn’t gameplan at all for their road trip and were just as lethargic and complacent as their most recent home win against Wake Forest. The criticism coming out of Wake Forest was that they got a little cute on defense and weren’t focused. The criticism coming back from Miami will be that the coaching staff didn’t get the team back on track for what was the most critical game of the season.

The gameplan on Saturday was all over the place. For starters, the Notre Dame coaching staff deviated from the formula that made them the #3 team in the country. Instead of focusing on the run, they passed the ball a lot more in an attempt to open up the running game. While potentially a good plan, Brandon Wimbush’s inaccuracy in the passing game was too much to overcome. The first glaring miss was when he overthrew Equanimeous St. Brown in the end zone which could have gotten the Irish to an early lead and set the pace for the game. The next errant pass was not as forgiving as a poorly thrown high dart came off the hands of an outstretched St. Brown and was picked off by an opportunistic Miami defense which would then be converted for a touchdown. This put Notre Dame down 14-0 early and it was all uphill from there.

Wimbush who had his issues as a passer all season continued to look flustered throughout the first half, making poor decisions, throwing with bad mechanics, and begin indecisive with his reads on the run-pass option. On a more subtle play, Wimbush tucked the ball and ran on a 3rd and 6 for a gain of five yards. What epitomized Wimbush as a runner was his indecisiveness and lack of awareness of the first down marker. Instead of making a direct run for the first down which was attainable, Wimbush tried to spin a couple of yards before the marker only to come up a yard short. Fortunately, the Irish were able to convert on fourth down with a 2-yard Josh Adams run. The drive would only sputter shortly after false start on Robert Hainsey on another 4th and 1 took them out of position to convert.

Wimbush’s errant passing would come again to haunt the team as he identified an open Chase Claypool who was coming across the middle but threw the ball high and behind him for his second interception straight into the arms a Malek Young, who would go on to bring it back to the Notre Dame 9-yard line. Fortunately, the defense would tighten up and only allow a field goal. With the second interception, this prompted Brian Kelly to go with a quarterback change which didn’t last long. After going three-and-out in his first drive, Ian Book looked to have built some momentum as he drove the team methodically down the field for 54 yards before throwing a pick-six of his own which made the score 27-0 just before the half.

The offense put the team in bad positions, and the defense couldn’t get them out. Aside from their first drive which started at their own 11-yard line, Miami received the ball at their 40-yard line or better in four of the next five drives with starts at their own 42, the ND 32, their own 46, their own 36, and the ND 9-yard line. As can be expected, Miami converted all of those drives into points with the exception of the one within their own 40-yard line. The only long drive that Miami had to string together for points was a 9-play, 90-yard drive to start the second half (which did include a conversion on 4th and 9 which wouldn’t have been taken had the game actually been close). Otherwise, Miami was gifted with short fields for most of the game and took full advantage of it.

Despite being put in bad positions for most of the game, the defense didn’t do much to keep the game close. Much like their outing against Wake Forest, defenders were out of place and undisciplined with their assignments. Even on plays where they anticipated a Malik Rosier draw play, the linebackers were out of place and weren’t able to close in on the Miami quarterback who wasn’t very efficient in the air, but repeatedly gashed them on the ground. Miami’s speed was too much on both sides of the ball, and it was this same speed that exposed them in the running game as Miami gained 237 yards on the ground of their own.

In the end, the Notre Dame coaching staff would have realized that they were out-coached in this matchup. The Miami defense knew exactly what the Notre Dame offense was going to run and were able to shut them down. The speed of the Miami defense was too much to handle and played a major roll in shutting down the running game. The Notre Dame backs were limited to 3 yards per rush as much of their horizontal runs were taken out of play by Miami which finished the night with nine tackles for loss and five sacks. It was the reason why Kelly felt that they needed the passing game which did not manifest itself. Notre Dame was handled by a Miami team that finished below them in recruiting in each of the past five seasons, which further indicates that the gap in the score was more due to coaching rather than talent.

Despite the outcome, there are plenty of positives to take. For starters, despite being an undisciplined performance, the defense didn’t perform as poorly as the scoreline would suggest. As previously mentioned, the defense were able to hold Miami to one touchdown on drives which began inside of the Miami 40-yard line. Another positive was that the defense was able to shut down the Hurricanes on third down, only allowing conversions on 2 of 13 third down plays for a 15% conversion rate. The negative was that they allowed Miami to convert 3 for 3 on fourth downs, but all of those were in the second half when the game was out of hand and a coach wouldn’t have otherwise called those plays in a tightly contested game. Those calls extended Miami’s 90-yard drive on a 4th and 9 and also extended a field goal drive twice and turned it into a touchdown instead. In a normal game situation Miami would have been lucky to get three points on a 49-yard field goal instead of two touchdowns. This is a defense that could have kept the game close with a better performance from the offense and could potentially return 10 starters next year.

With the result in the rear-view mirror, it will be important for this team to refocus. Even though they are likely eliminated from a potential playoff appearance, a 9 or 10 win team can still make it to a major bowl game this year. The Irish will be heavily favored against Navy at home, and a road contest against Stanford will likely be seen as a toss-up at this point. Winning at Stanford would elevate this team to 10-2 and would signify a massive improvement from a team that went 4-8 last year. It would also give the staff a lot of momentum heading into the early signing period as they look to lock in the bulk of their recruiting class before transitioning into bowl prep. Once in the postseason, Notre Dame has the chance to finally win their first major bowl since the 1994 Cotton Bowl against Texas A&M. The end to the season will go a long way to validate the program which made strides in the past year and give them the platform to contend for a playoff position next year. It would also mark the second best season for Notre Dame football since the Lou Holtz era. Regardless of the outcome in South Beach, coach Kelly and this Irish team still have a lot more than pride to play for.