Under Armour unveiled new “Stronger, Lighter, Virtually Ungrabbable” Notre Dame jerseys today! The word ‘Ungrabbable’ catches everyones eye as they read the headlines about the new jerseys. Other jersey makers like Nike and Addidas have also been trying to make changes to the jerseys to make them tighter and harder to grab, but Under Armour has been the leader in the new clothing technology and it looks like they have done it again with the new Armourgrid technology! It remains to be seen how hard it will actually be to grab them, will the players even be able to get them on? We wont have an answer until we can see them being used in game action.  Cincinnati, Auburn, Utah and Maryland will also be using the new Armourgrid jerseys.

One of the biggest differences in the style of the uniforms is the color of the pants, looking more gold, than in previous years. They color has often been changed but the results often end up looking mustard or brown, but it appears Under Armour is getting closer!

The base layer also looks slightly different, with the word ‘IRISH’ on the sleeve. 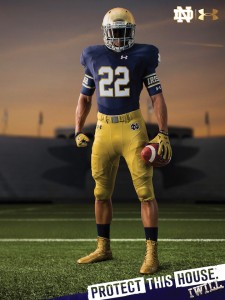 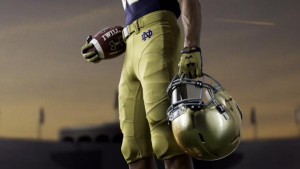 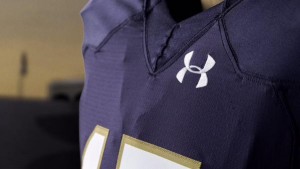 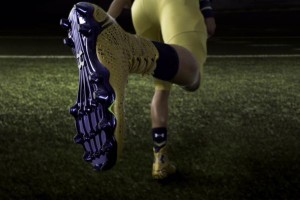